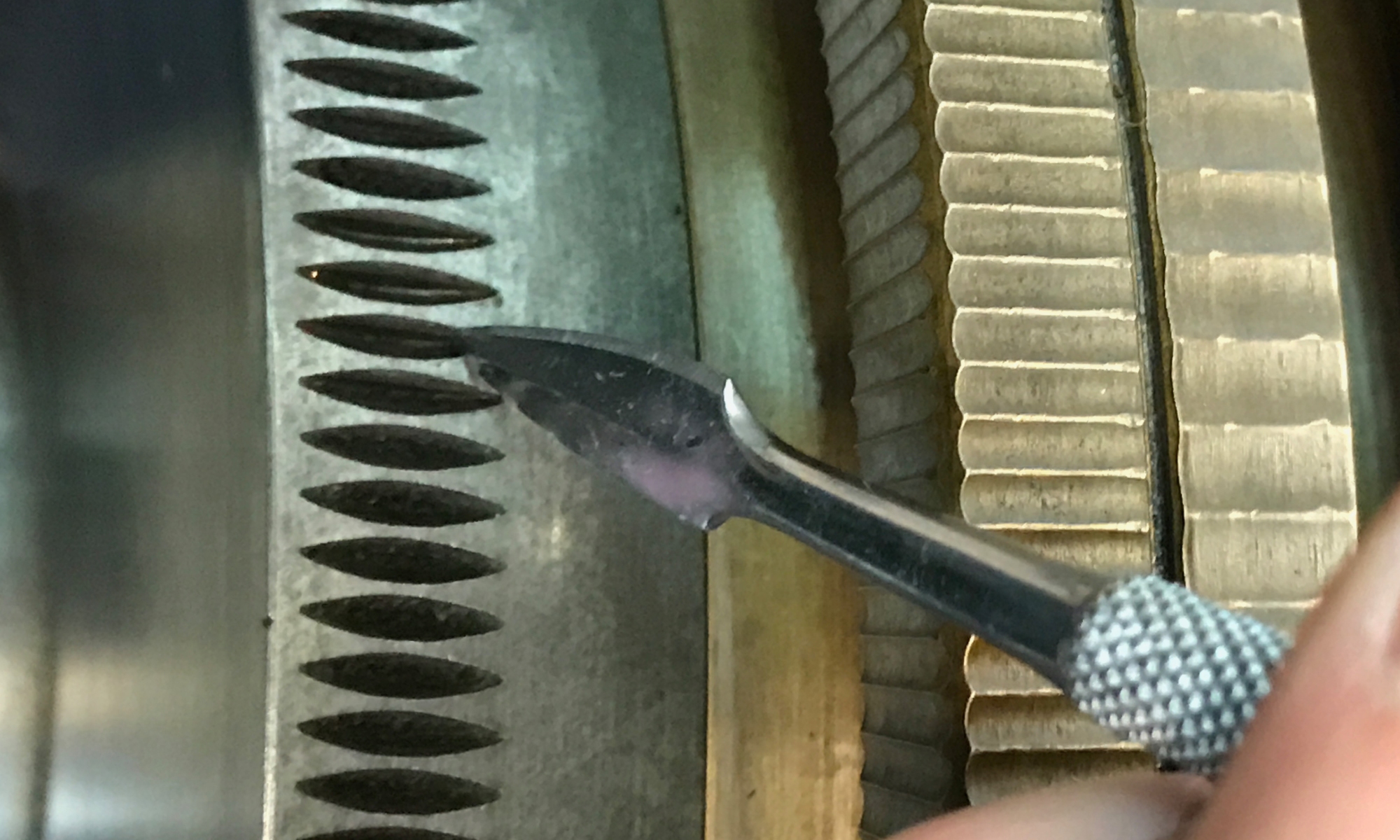 From the bench of Callie Shevlin:

I’ve been working a lot on the straight line since I last wrote. As a small diversionary tactic, I also decided to dismantle my rose engine, 100%. As you might imagine, I had a shop full of tiny screws and weird parts. I even labeled and wrote on the tile floor to make sure that it all went back to where it belonged. The rose was taken apart because the division plate wasn’t moving at all, so it needed a top down revision (and I now have a plan to do this every 5 years to make sure all is in good condition). 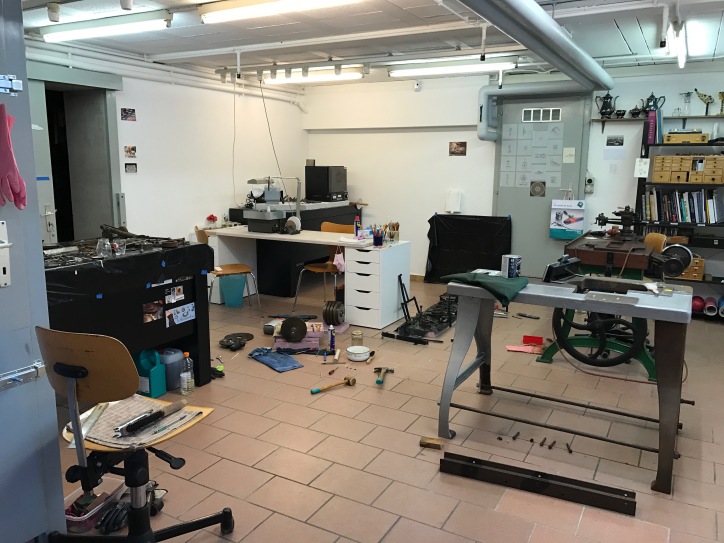 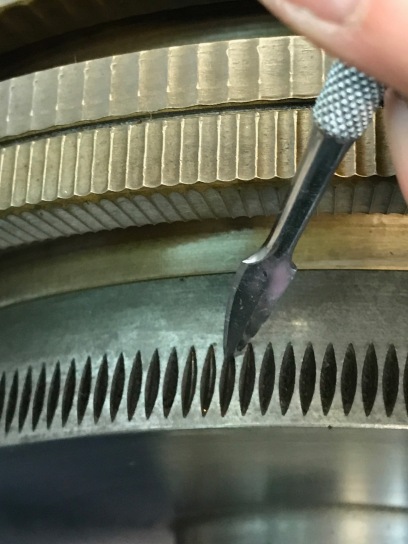 I have been methodically removing rust in the various ways that you do, more on that later. I have labeled EVERYTHING so that I don’t have any extra pieces in the end. 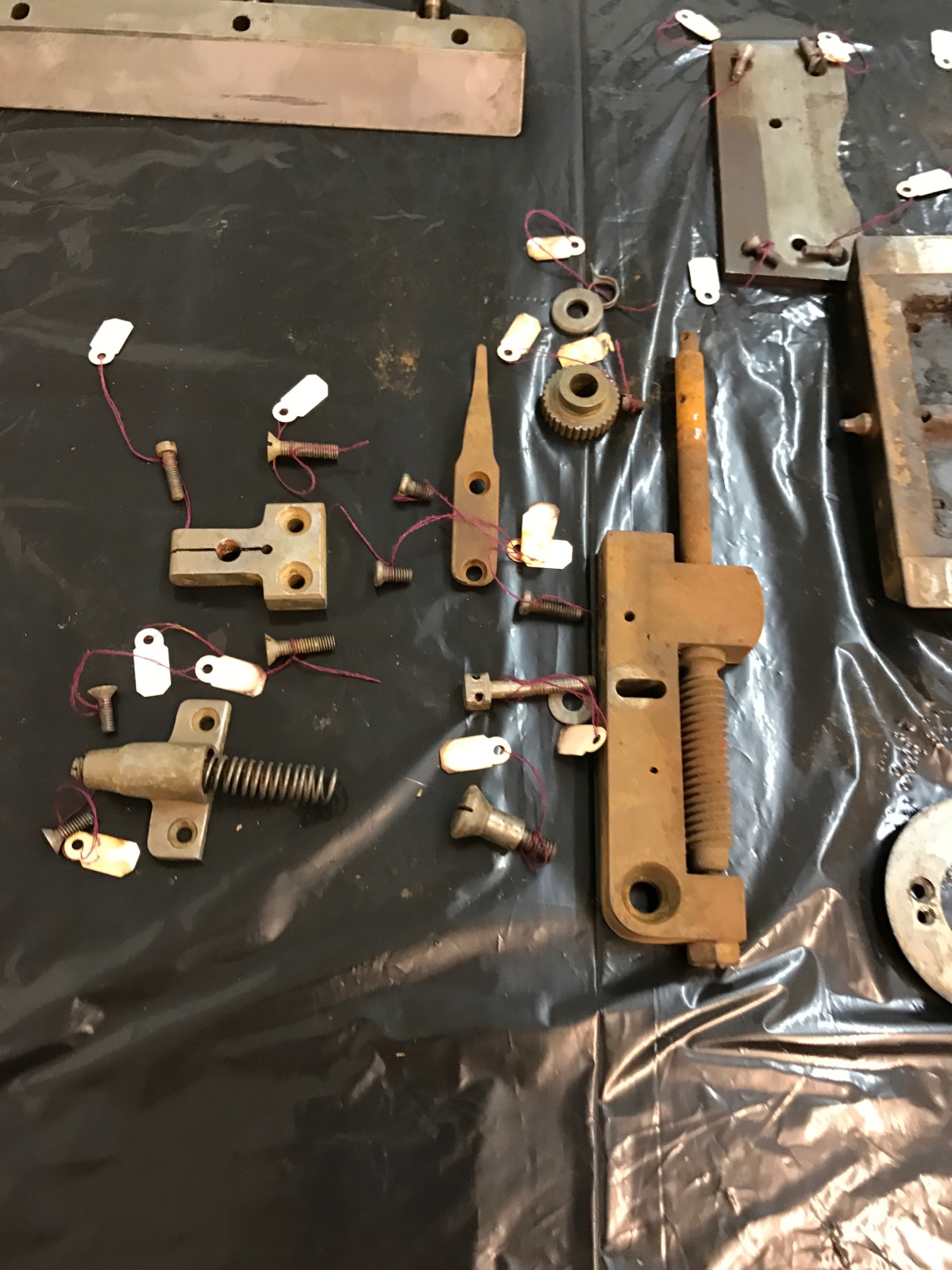 As I was doing a pre-brush on this worm, I dropped it and, well, it broke cleanly in 2 pieces (the screw was still in tact, but the metal frame was so brittle, it was a goner). I’ve overtaken my perlage work bench and covered it with some trash bags so that I could put every piece in it’s square inchage with it’s neighbors. 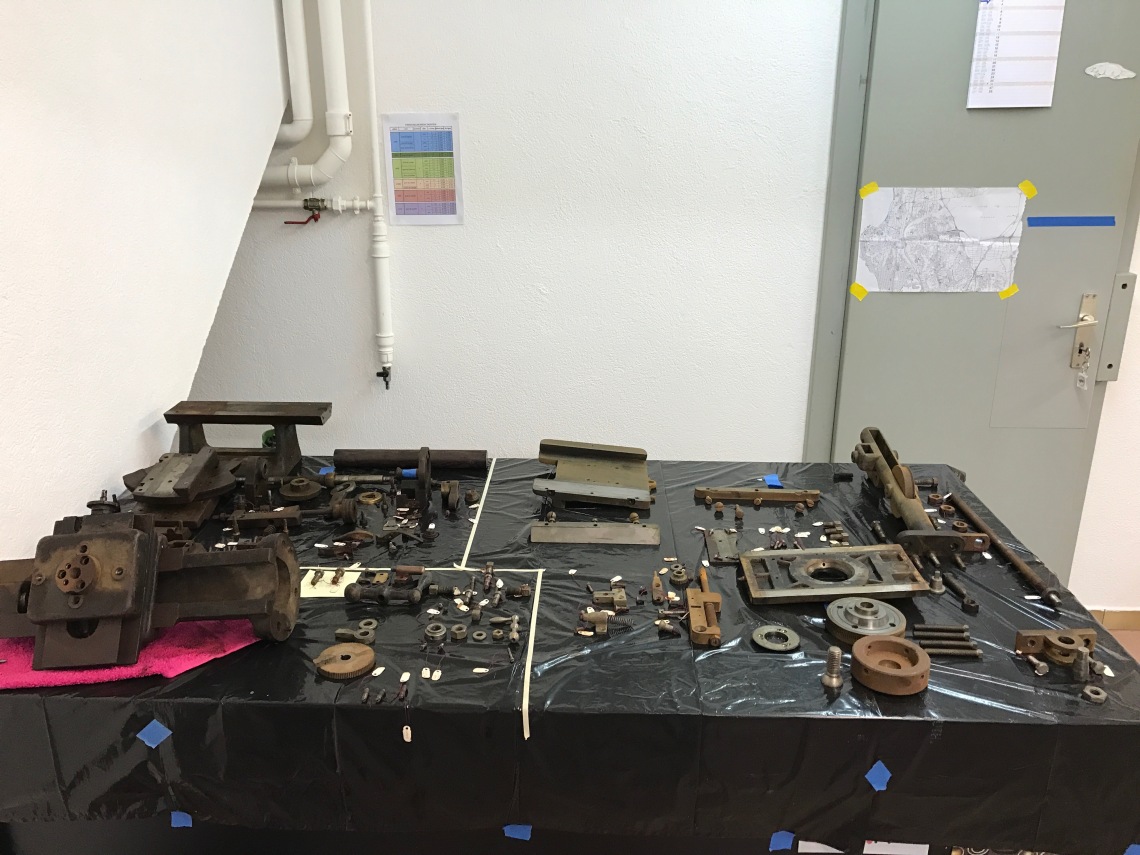 I have found that taking apart the pieces on the headstock/ work holder structure and the pattern bar structure has been really easy even with the rust. There were several screws that were still really well lubricated just inside, and I know I was lucky. The slides all disassembled without a problem as well. The difficulty for me was the cutter chariot. Absolutely NOTHING would come off, I had to beg, WD-40, plead, cry a bit, hammer with my rawhide mallet and coax each and every piece off.

Needless to say, these pieces were really dirty and thick with grease, which turned to glue, but not too much rust. This must have been more protected from the elements.

I decided to be ecologic and use table vinegar to take off the rust from the small screws. 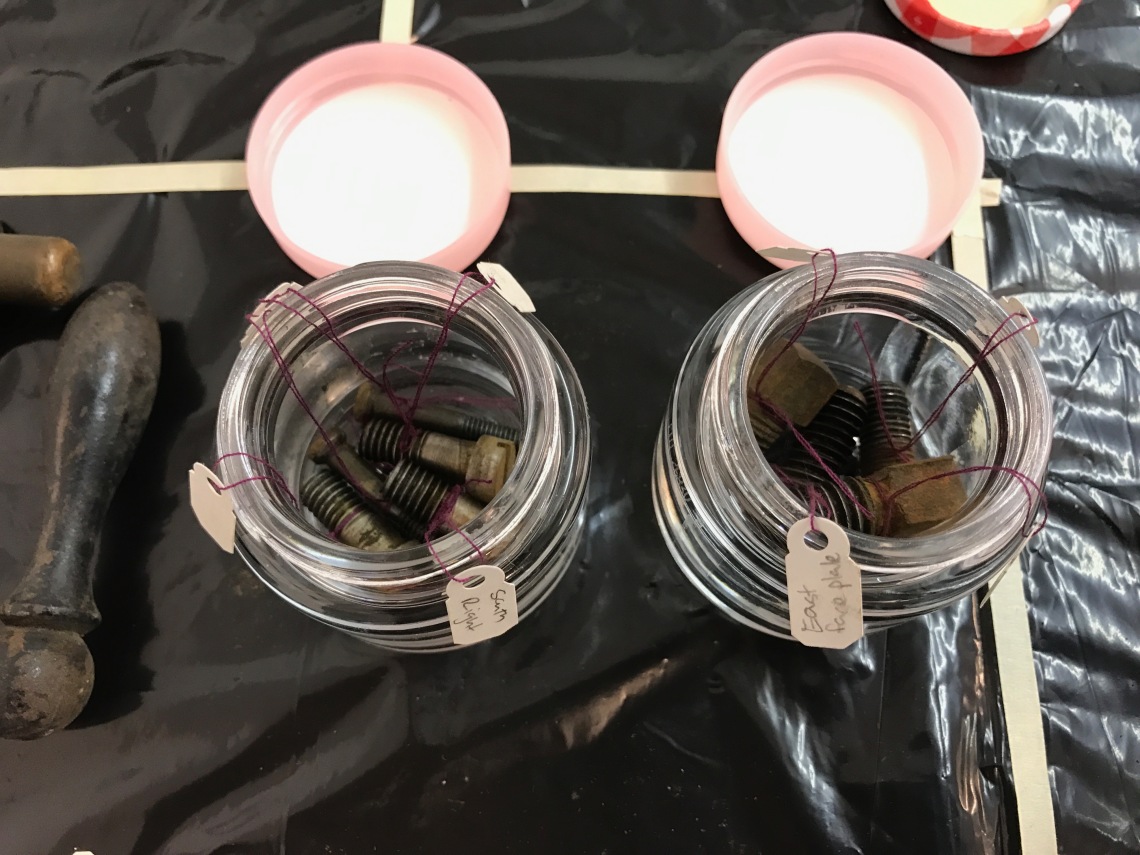 I started with small jars, and hung the labels of the pieces outside the rim and did pieces that were small, and were neighbors. I agitated the jars every 30 minutes when possible, hard enough to get things circulating, but not so hard that the screws would slip out of their tags. I filled each jar just enough to cover the parts inside. 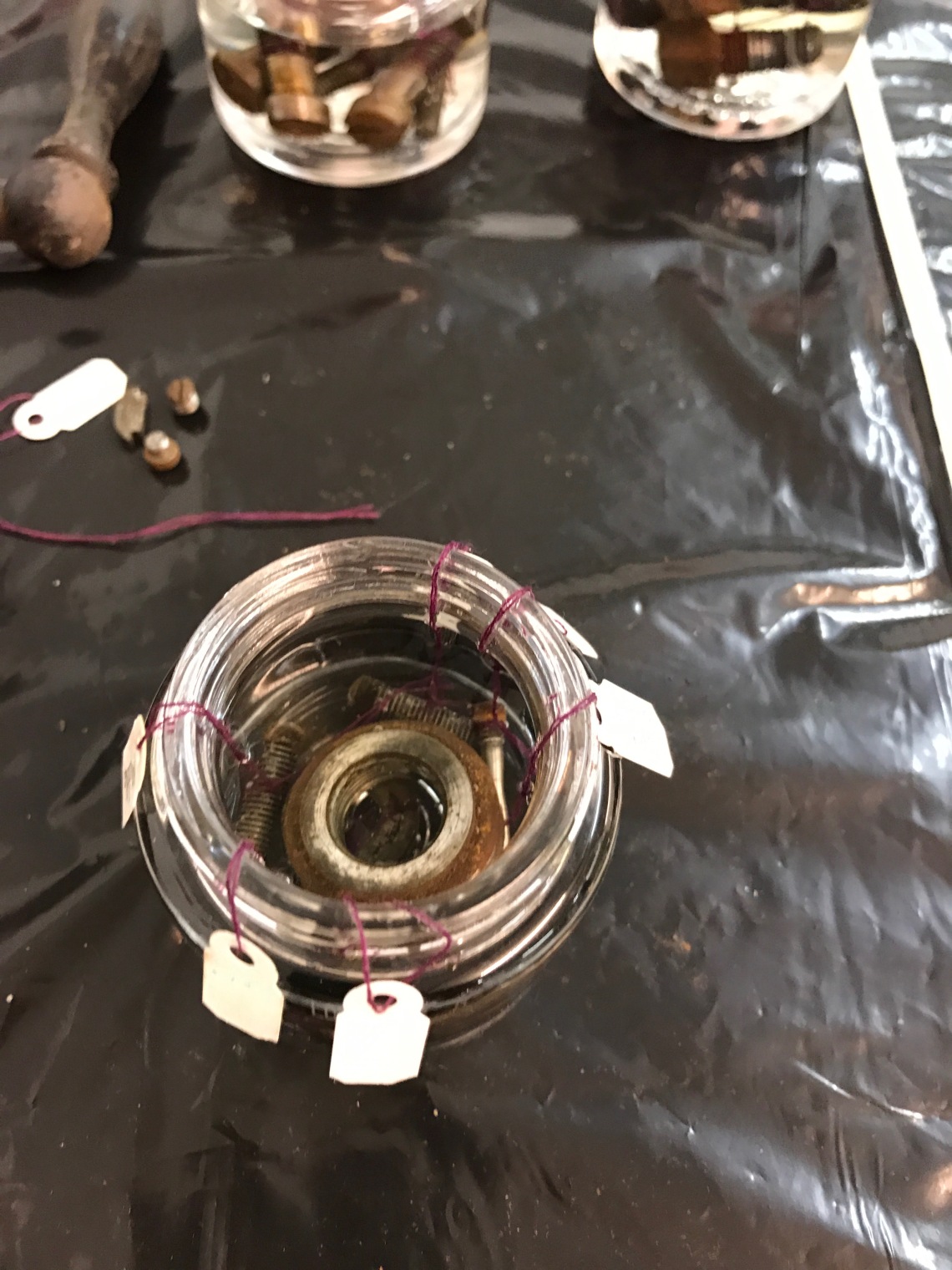 For the first batch, I started the vinegar bath at 10am and ultimately stopped it at 5pm, 7 hours of soaking. The rust came off like a charm, but the grease still needed to be hand taken out, of every thread, on every screw. I rinsed each piece and took the grease off, then used my nifty little parts dryer to make sure the rust would not be coming back. 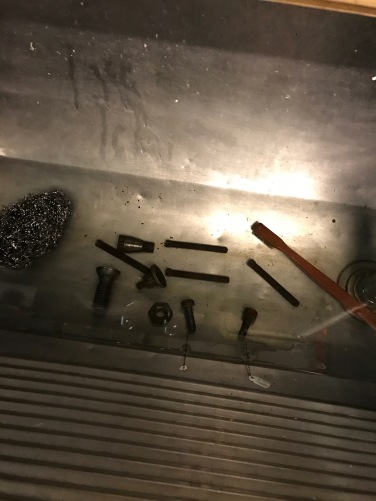 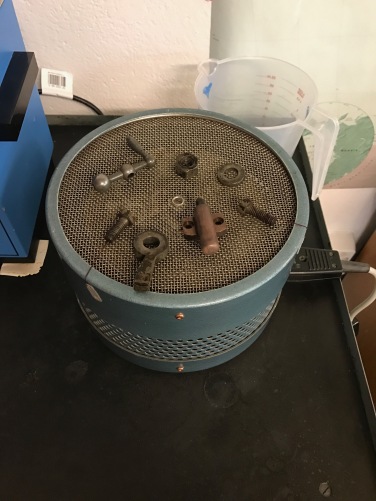 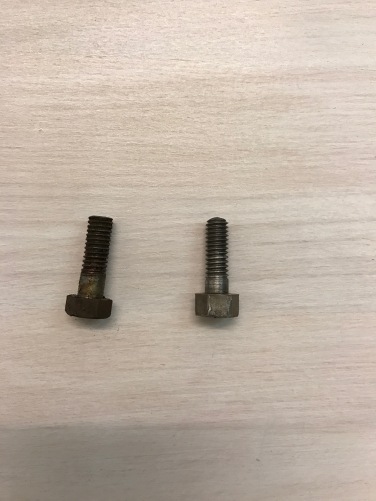 During the long waiting time, I decided to check out some paint for the base. I decided and voiced this (took a vote actually), that I wanted to paint the base either safety yellow, or fuchsia. Yes, you read that right, yellow or pink. It was vetoed, so I picked from the limited selection at the hardware store, and decided on silver, with hammer texture to help hide the sandblasting marks. 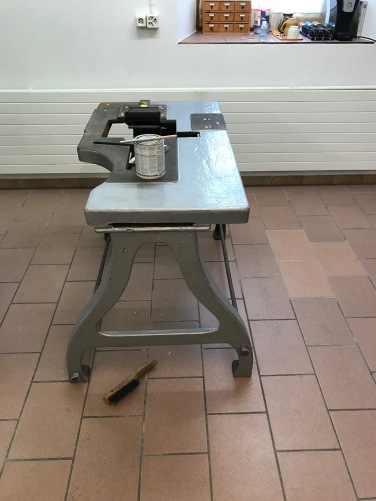 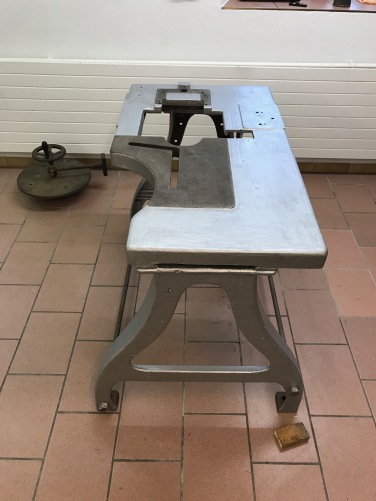 The machine as it is today, is ready for the second and final coat!

There was a piece of ‘I’ beam screwed to the underside on the left. 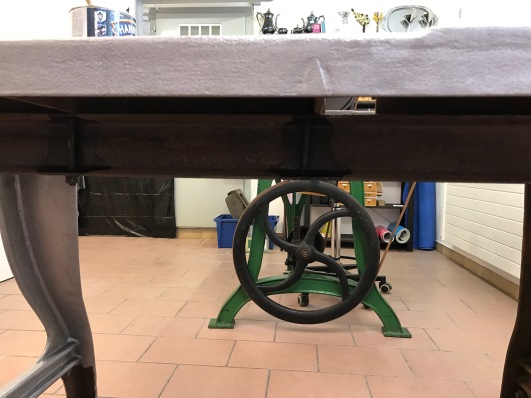 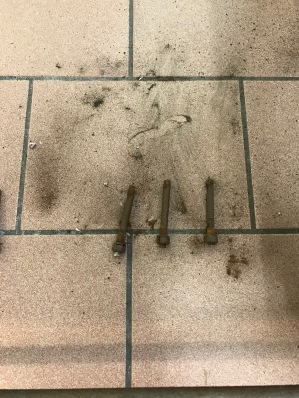 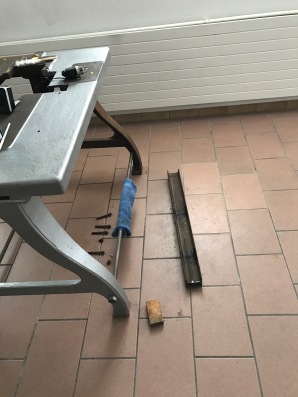 I didn’t see it supporting anything, so I started to take out the screws. Out of the 6 screws, 2 were disintegrated entirely, 2 were stuck and 2 came out like a dream. I had help pulling it off, and have placed it in the closet for now. I still need to saw off the 2 screws that are partially attached still. There was also one piece on the underside that had the MOST rust I’ve seen.

One of the things that I find relaxing is hand scraping the old paint off using chisels, scrapers, screwdrivers, whatever fits the curvature I’m currently working on. 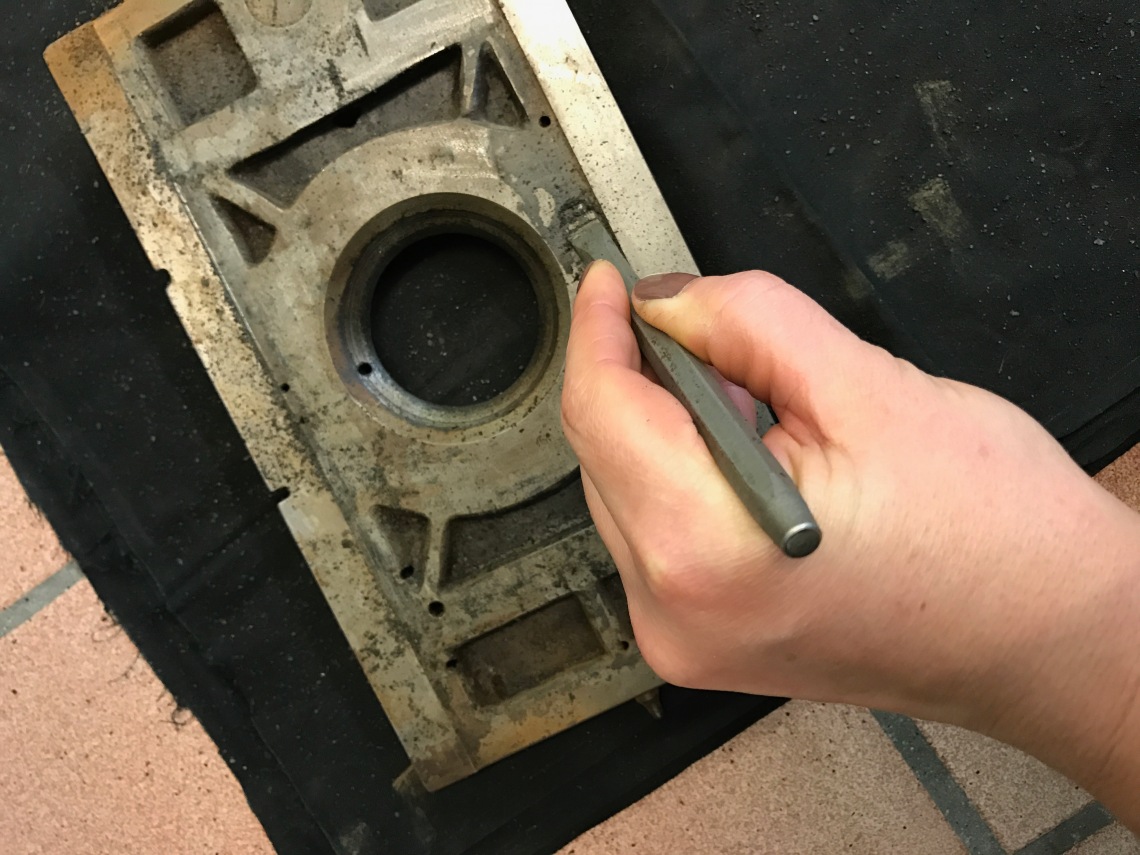 I am currently having a hard time taking the x and y-axis slides off of the pattern bar support. I’ve removed all the paint and old grease by hand, unscrewed with the hand wheels maximum and back to minimum, but can’t see what I’m missing. 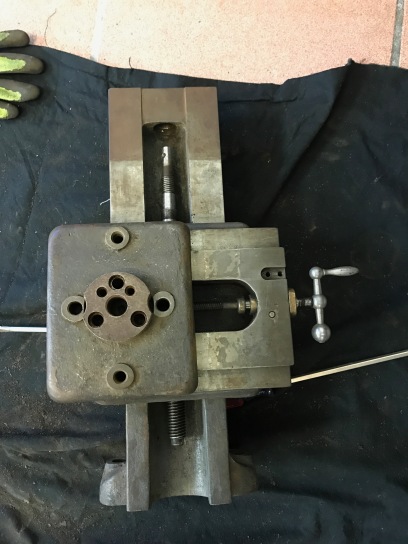 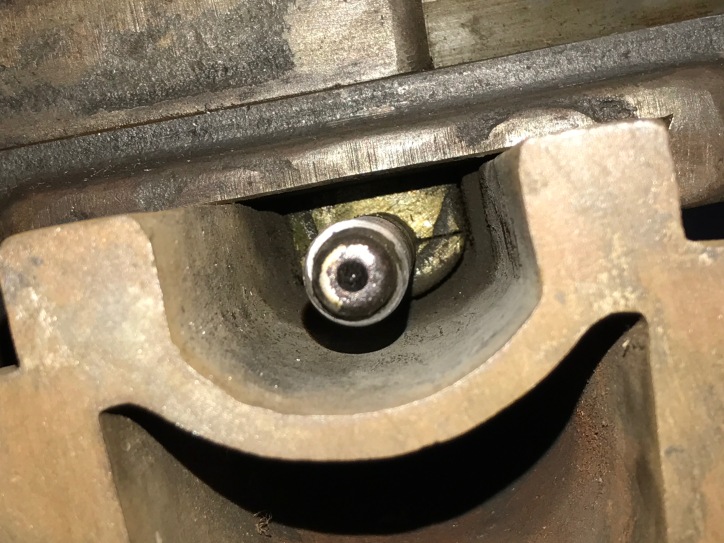 I’ve taken the inside picture and it seems to be a two-piece threaded channel, but I am not having any luck, so a second pair of eyes is going to come in and check it out this week.

I did my first 2 of 4 large batches of vinegar baths this week. It smells like the purple chemical I was telling you about in the last post. I think it was basically purple vinegar. 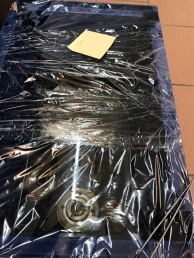 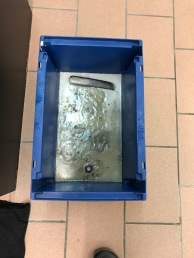 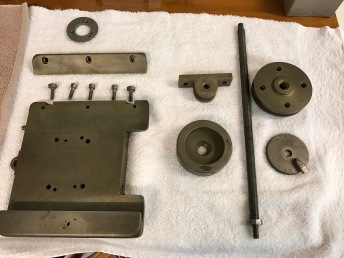 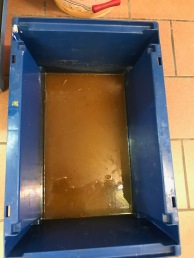 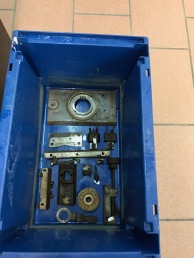 These are the vinegar covering the pieces (and the plastic bin is covered with plastic wrap to limit the H2S; hydrogen disulfide), adding baking soda to neutralize (and to get the rust flakes to float off, less scrubbing on my part), the after effect (so shiny!) and the sludge that rests. I know that I could pour this down the drain, but I prefer to put it in a bucket and let it evaporate, I need to put it outside this week on a hook near the top of the carport so that it can evaporate more quickly, but it’s been pretty cold, and I’d rather not have a bucket of nasty looking ice.

I am proud to say that I have almost ALL of the parts cleaned, greased and put lightly together. The bulk of what rests is from the sliding chariot, and that’s more elbow grease.

I am also happy to announce that I have found a micromechanic. He is a friend of a friend, and I heard that Gilbert (this mechanic) was looking for 1 new client. He has an atelier less than a mile from mine, and he came over to measure and start making the obvious parts that I’m missing. Screws for mounting the 2 large supports, a vice-like screw for the sliding chariot, rubbers for my rose engine, and various other small things. We will be working together as long as possible, because Gilbert is 85 this year; I’m lucky I found him and that he can make whatever I need!

I feel like I am really making progress, but have also started this week making pieces for Basel World. The next blog post will be about the progress of the straight line, but also: Guilloché of Basel World 2017! Stay tuned.

On a side note: If you, dear readers, happen to own a Lienhard straightline machine the author would be most grateful for any reference photos! Contact Callie at: calliemay23@gmail.com

This site uses Akismet to reduce spam. Learn how your comment data is processed.